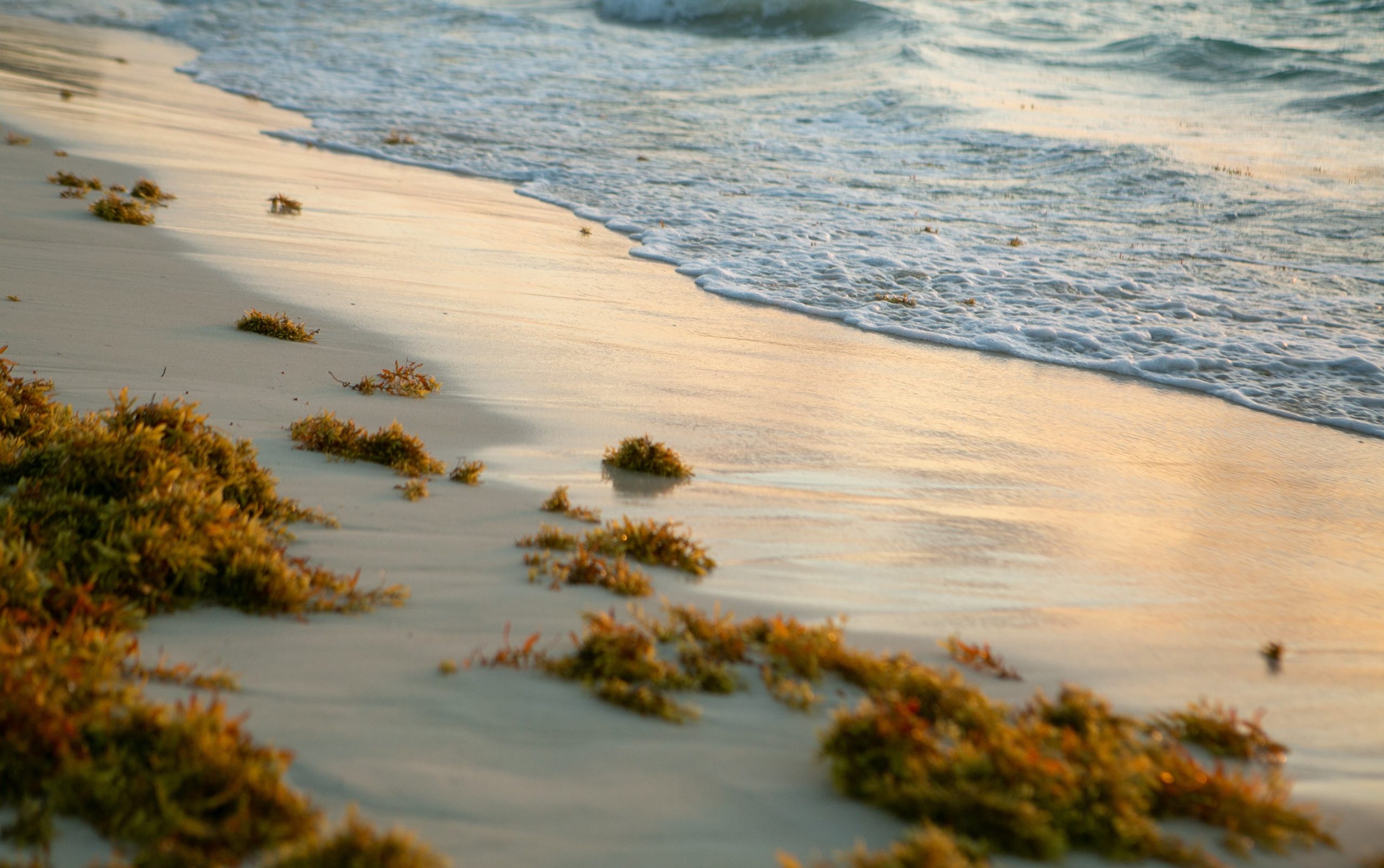 Some visitors on Florida beaches notice a bad smell, especially in the Florida Keys. It smells like sulfur, sewage, rotten eggs or natural gas.

The smell can be overwhelming. The worst time tends to be in hot weather during hot summer months.

Visitors often worry that there is sewer leak, or some other contaminate in the water.

Bad smells in the Florida Keys are usually from rotting sargassum seaweed and other organic matter on beaches, in the ocean and on the seafloor.

Bad smells can also arise from muddy, shallow water environments which are common throughout the Keys.

Many areas in the shallow water Keys “backcountry” naturally release hydrogen sulphide and other gases. Nutrient-rich mud releases the gas as dead plant and animal remains decompose. This is a natural process and occurs in many shallow water ecosystems. Source

The severity of the smell is heavily dependent on the wind direction. There is usually a fresh sea breeze in the Florida Keys. Bad smells may dissipate or disappear when the wind shifts, or the wind speed increases.

Although the smell is unpleasant, many visitors and residents report that they quickly become acclimated to the smell, and it’s not as bad as it first seems. 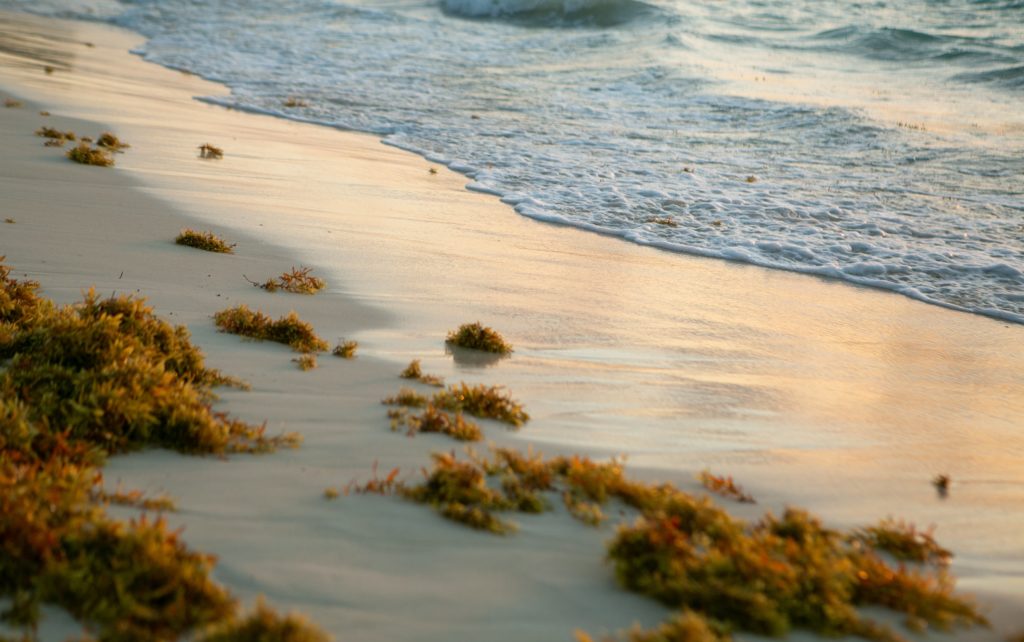 Sargassum is a brown marine algae, commonly known as seaweed. It grows in the Atlantic Ocean, Gulf of Mexico and Caribbean Sea.

Sargassum has leafy tubular branches and berries. The berries are filled with air and other gases; they float and help sargassum drift at the ocean surface, where it grows. Source

Unlike other sea grasses in Florida, sargassum only ever exists as a floating seaweed. It never grows on the seafloor,

Sargassum is naturally occurring. It is normal for sargassum to drift in the ocean and to sometimes land on beaches, in normal quantities.

Sadly, human pollution and climate change are causing runaway levels of sargassum, which can cause extreme problems in a variety of ways. 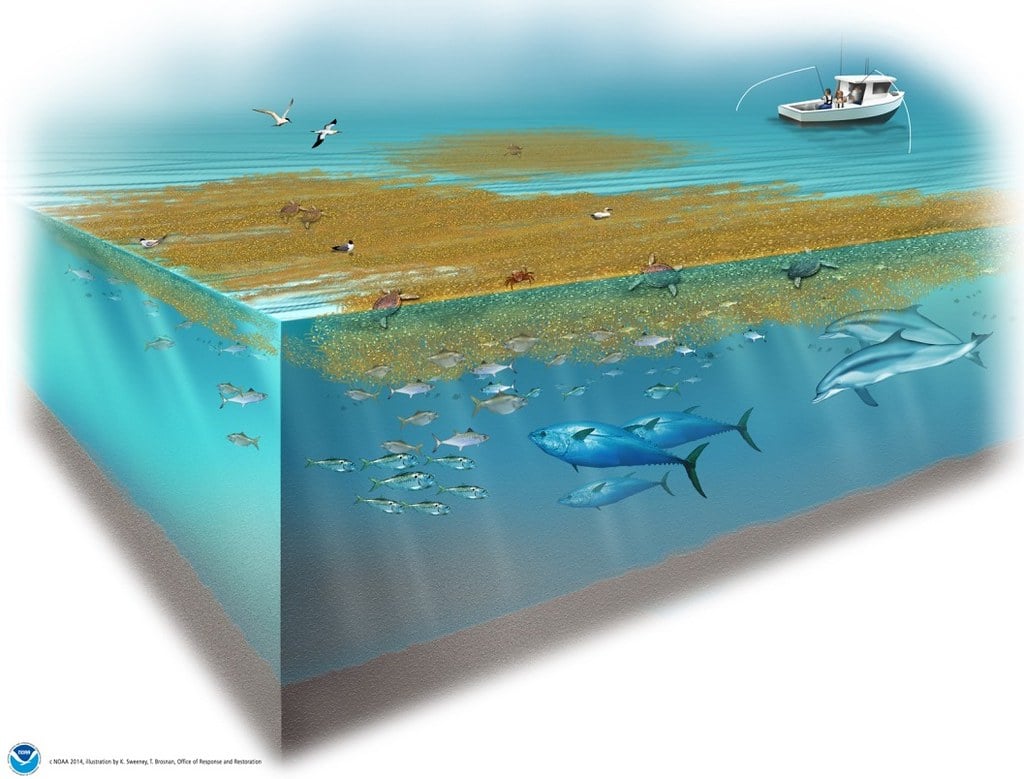 Although it can be annoying and smelly, sargassum is normal, and an important part of many marine and beach ecosystems.

Sargassum is only a problem when it accumulates in large, uncontrollable levels.

Sargassum floats provide shelter and food for countless marine organisms, including more than 250 species of fish, sea turtles and many others.

The rafts also provide a food source for seabirds at sea, and on the beach, because so many tiny marine organisms live in the seaweed.

Because it is a vital component of the marine ecosystem, Sargassum is classified as an “Essential Fish Habitat” in the United States. Source

Sargassum itself is a plant and cannot sting or cause skin problems.

However, many small marine organisms live in sargassum, including small jellyfish, portuguese man-o-war and others, which can cause stings, rashes and irritation.

People should avoid swimming near sargassum and seaweed to avoid possible stings and irritation from marine organisms.

When sargassum levels become very high, off gassing can occur.

In high concentrations, hydrogen sulphide may cause respiratory difficulty and skin irritation for some people, among other things.

Visitors are advised to avoid heavy concentrations of sargassum, especially if it causes any discomfort or health concerns. If anyone in your party has health concerns, try to leave the scene, and consult a qualified medical professional.

Although sargassum is naturally occurring, human environmental pollution and impacts may be causing runaway sargassum outbreaks.

Warming ocean temperatures, ocean acidification and fertilizer pollution are all contributing to the problem.

“There has been a huge increase in fertilizer use, and an increase in rainfall as a result of climate change,‘’ said Brian Lapointe, a biologist at Florida Atlantic University Harbor Branch Oceanographic Institute, who has studied the seaweed for 40 years. “That combination is exacerbating the sargassum blooms and affecting the ocean ecosystem as a whole.’’ Source

Heavy rainfall washes fertilizer and nutrients into the rivers and waterways, which eventually drain into the ocean.

Heavily polluted water from the Amazon and Mississippi rivers are two main sources of excess nitrogen and fertilizer pollution. Both of these rivers are believed to fuel the runaway growth of sargassum.

Researchers at Florida Atlantic University documented a 35% rise in oceanic nitrogen between from the 1980s to the 2010s.

“I imagine global warming is part of the problem,” says Amy Siuda, a sargassum specialist at Eckerd College, Florida. “We’re experiencing changes in currents that certainly can be related to warming of the atmosphere.” Source

Warming oceans and climate change may also be changing historical wind patterns, which could transport sargassum floats into regions which weren’t previously affected. And, there are numerous other explanations that could be responsible. 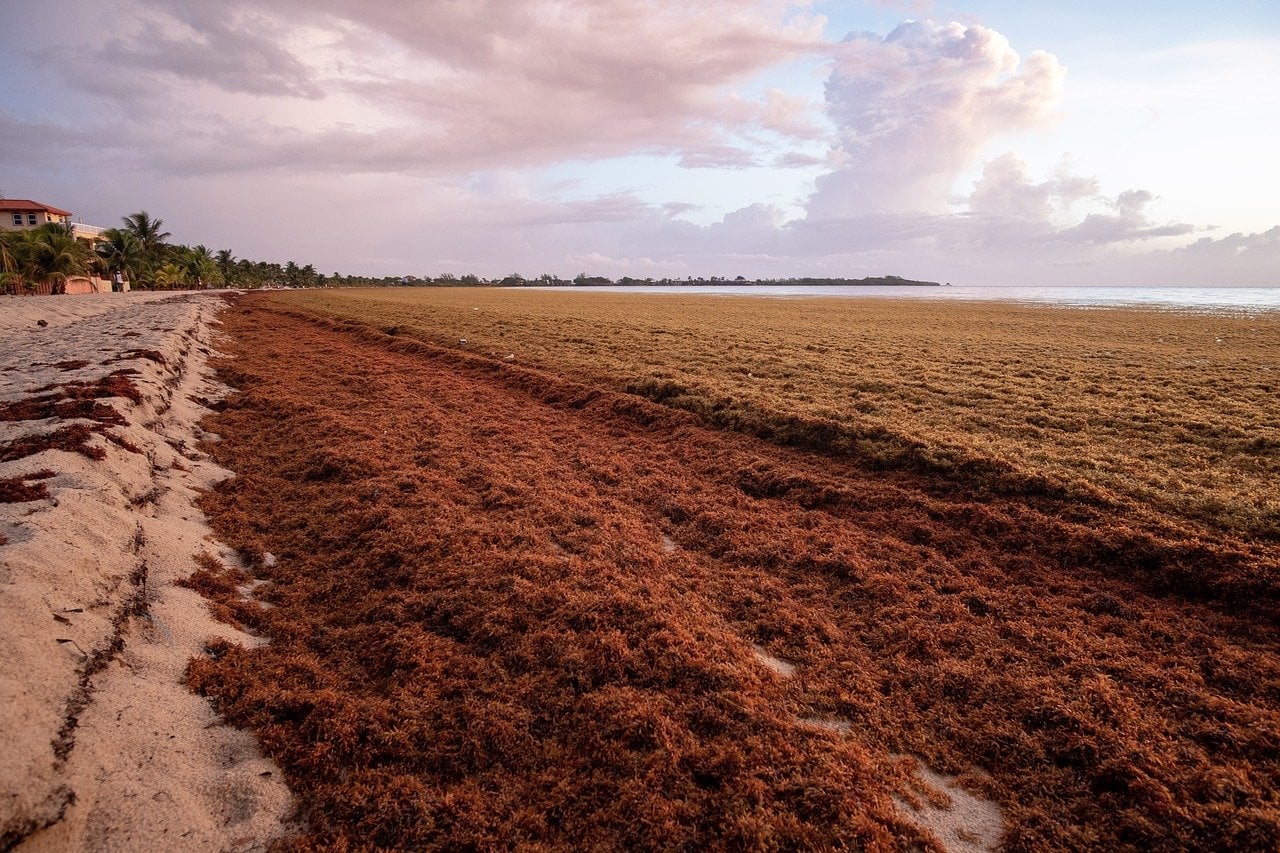 Large, uncontrolled buildups of sargassum can cause serious problems for sensitive marine ecosystems.

As the sargassum decomposes it consumes large amounts of oxygen, as part of the chemical breakdown process.

Massive fish kills have been caused by this process. Sadly, when fish kills occur, the decomposing marine life releases additional nutrients into the water, which can exacerbate the problem and cause a cascading effect.

These dangers are especially catastrophic to juvenile hatcheries and areas where young sealife are born and raised, leading to lower species populations in later years.

Some south and central American countries have struggled with record-breaking levels of sargassum, which has caused severe economic problems.

Some beach communities have experimented with barriers, booms and other devices to stop sargassum from washing up on beaches, but they are not typically effective.

How to Deal with Sargassum

Visitors who dislike swimming with sargassum may be able to look for other beaches that are free from seaweed.

Islands in the Florida Keys often have beaches on various sides of the island. If one side is covered in sargassum, beaches on the other side of the island may be clear, due to different wind and tide patterns.

Many beaches in Florida are regularly groomed to remove seaweed.

On a community level, experts advise that moderate amounts of seaweed and sargassum should be left alone.

Communities are advised to only intervene when devastatingly large amounts of sargassum accumulate.

Even then, care must be taken to avoid damaging fragile coastal areas while trying to “solve” the problem.

Coastal ecosystems are complex; the sargassum actually helps in many ways, including preventing beach erosion and stabilizing shorelines, among others.

On a global level, we should stop damaging our oceans and natural environments.

Rising ocean temperatures and fertilizer pollution are growing the sargassum problem, and many other serious problems.

The health of our oceans is at a dangerous tipping point; we should stop killing them.

The Present and Future

As long as ocean temperatures continue to rise and countries around the world continue to dump fertilizer and nitrogen pollution into oceans, the problem continue to grow.

It is important to remember that Florida is a huge nitrogen polluter, and we already struggle with red tide, red-green algae and other natural disasters because we are polluting our own waters.

They say that sargassum growth in 2021 may be another record-setting year. As of the summer of 2021, sargassum blooms have already reached worryingly large levels.